A collaboration between two German musicians, Rainer Bürck and Roland Graeter, and British composer and computer musician Lawrence Casserley. The core work of the collaboration is improvisation, but they can also include in their programmes pre-composed music by themselves and others. In addition to performances they can offer workshops in a variety of subjects, particularly real time audio and MIDI processing, contemporary piano technique and improvisation techniques.

"The Trio took us on a sound trip to the outer limits and beyond."

"The developing music is pushed and pulled by the spark of ideas generated within the moment-to-moment interaction of the players." 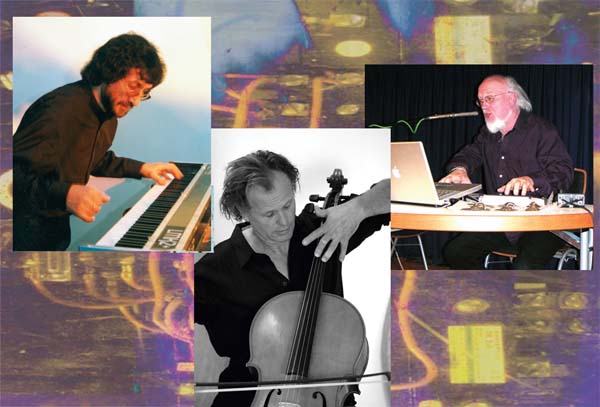 The trio combines Bürck's piano and Graeter's cello with Casserley's unique signal processing instrument, "real time manipulation of elements plucked from the sounds they produce, and transformed on his IRCAM Signal Processing Workstation, sometimes as a gentle colouration, sometimes as an enveloping force" (Glasgow Herald). Using a variety of techniques Casserley can create transformations which are 'local' to the source musicians, 'local' to himself, or complex 'fields' of sound surrounding performers and audience, always derived in real time from the sounds generated by the source musicians. They, in turn, can react to, and inter-react with, the electroacoustic instrument. "Brck and Graeter improvised freely, producing weird and wonderful sounds which were instantly seized by Casserley, sculpted, then fed back through speakers so that the other two could then respond in turn" (Aberdeen Press and Journal).

"The result was a mind-blowing conversation in abstract sound, colours and shapes, between the three performers."

Bürck, Graeter and Casserley bring to their music making a collective experience of great breadth and depth, in improvised music, contemporary playing techniques and music technology. The resulting interaction between musicians leads to a performance of great power and subtlety.

Rainer Bürck studied piano and composition in Stuttgart and electroacoustic music in Nuremberg with Wilfried Jentzsch. He also studied musicology and philosophy at the University of Tübingen. Currently he works as a freelance composer and pianist. His activities as a pianist concentrate on contemporary repertoire, and he has performed at numerous festivals and venues of contemporary music in Europe and premiered many works by composers from several countries, especially in collaboration with piano duo partner Robert Ruhle. As a composer Rainer Brck has been focussing on electroacoustic music in recent years, creating works for tape, for performers and tape and for performers and live electronics. His works have been performed and/or broadcast in Germany, Britain, Holland, France, Italy, Austria, USA and Brazil. He has also developed software for MIDI processing and stochastic composition.

Roland Graeter studied architecture and has been working in the field of improvised music since 1980. He has performed in Germany, Switzerland, UK, USA and France, both as a soloist and in collaboration with various duo partners. The cello is his main instrument, but Roland Graeter has more and more integrated his voice, gestures and some percussion instruments as a kind of counterpoint to the cello.

Lawrence Casserley is one of Britain's leading performers of live electroacoustic music. He is working currently on new approaches to live computer processing, particularly for improvised music. Recently this work has led to concerts, workshops and residencies in Germany, Holland, USA and Britain. He has active collaborations with a number of musicians performing improvised and pre-composed music and is a Director of the Colourscape Music Festivals. Casserley regards real time computer processing as an instrument in its own right, but also, like Graeter, integrates vocal and percussion sounds into his work.