In addition to his Electro-Acoustic Ensemble, Evan Parker has from time to time put together several smaller groups which relate to the Ensemble. The most consistent of these is a series of Quartets consisting of Lawrence Casserley, Joel Ryan, Parker himself and one other instrumentalist. To some extent at least these smaller groups have been a "testing ground" for ideas that subsequently surface in the work of the Ensemble. For a history of the Electro-Acoustic Ensemble go here.

The first example of this was a one-off performance on 10 December, 1997 at Les Instants Chavirés in Montreuil, Paris featuring "local hero" guitarrist Noel Akchoté as the fourth player. Excerpts from this evening were released on Leo Records (CD LR 255). This was also the first occasion on which Lawrence and Joel worked together.

The second iteration included pianist Agustí Fernandez, who later joined the EAE (in 2002, as did Joel Ryan), as the fourth player. This configuration made a short tour in Spain to Barcelona and Valencia in November, 1999.

By far the most enduring of these is the Quartet with Paul Lytton. This was brought together first for a tour of Japan, promoted by Jazz & Now, in autumn, 2000.

All of the Japan tour was recorded, but unfortunately no material has yet been released. 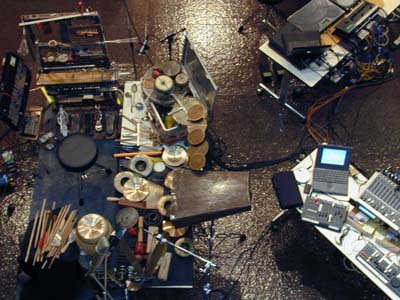 Overhead shot of the setup in Iwaki Museum of Art - 5 October, 2000. On the left is Paul's kit, with the "Frame" at the top, and his "Scrapheap" laid out below and to the right. Top right is part of Lawrence's kit showing one of the DrumKats, Peavey fader unit and Apple PowerBook. Bottom left is part of Joel's kit, including PowerBook, mixer and fader controllers. Photo by Joel Ryan