"The listeners were drawn note by note into an unceasing transformation of the spatial and temporal coordinates.

"The sense of time and space was at times expanded by the acoustics of the church and by the use of loudspeakers in quadrophony which relayed the electronic sounds layered and diffracted by Casserley. At other times it contracted when the reverberations around the nave became focused in the apse in instrumental solos and duos, intensely concise, devoid of rhetorical excess, underpinned by a discrete use of extended instrumental technique and of noise." 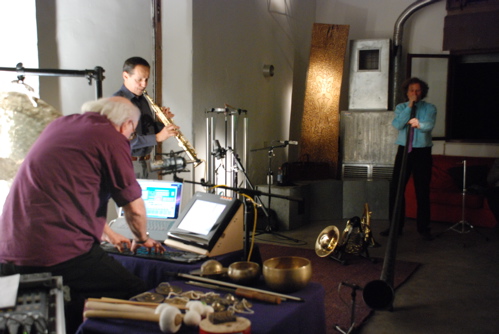 "The textures woven by Casserley created an elusiveness in the distinction between cause and effect, between the instrumental sounds and their “virtual double”, transforming one into another in a sort of endless feedback.

"Strange to say, this is after all about a concert, yet this music becomes an expression of Hsin-hsin-ming’s famous Zen saying “There is neither “Other” nor “I” (...) All that can be expressed is: “Not two””."

Press cuttings can be found here

A list of performances to date can be found here

Our CD "Scenes from a Trialogue" released on Amirani Records in January, 2016.